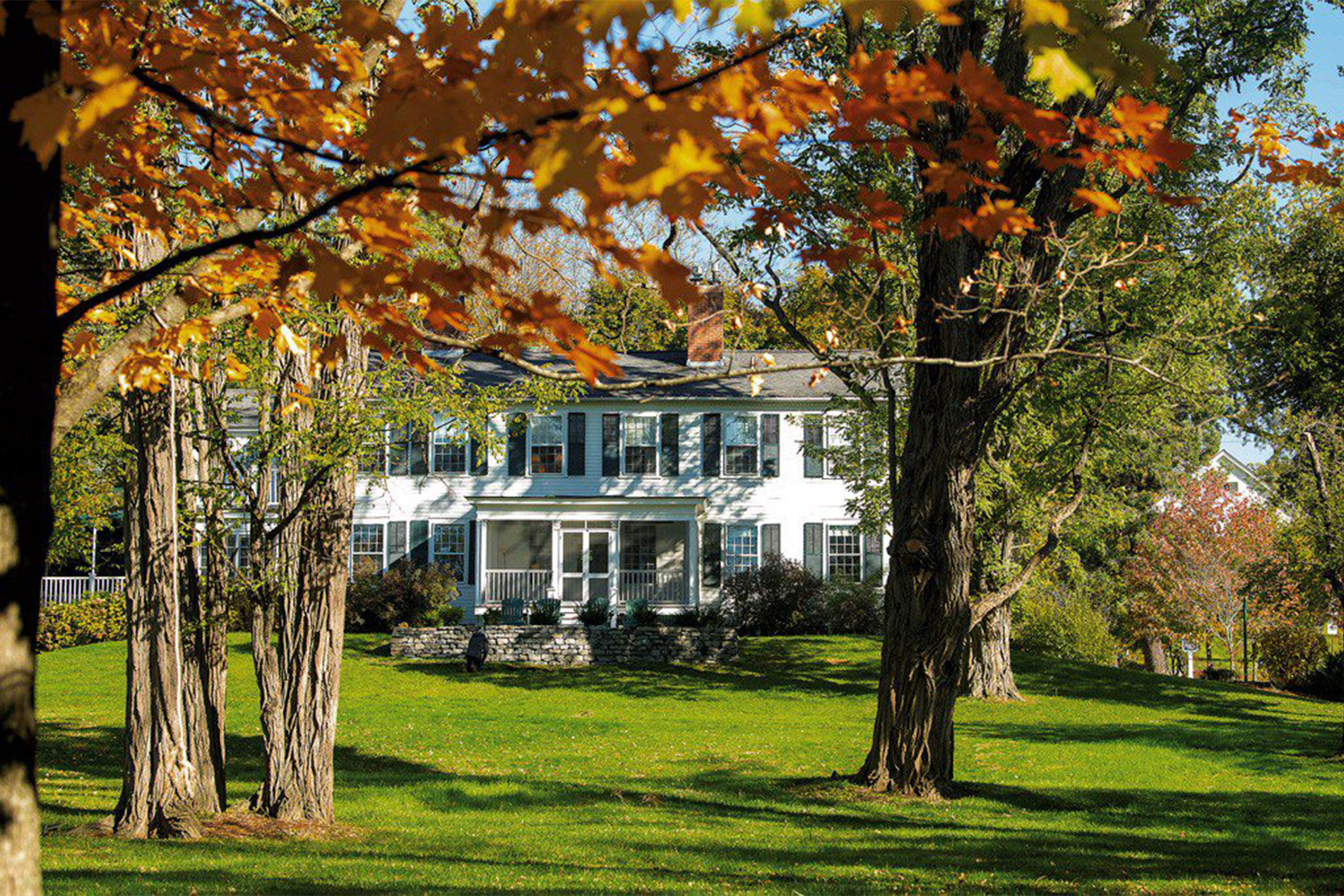 Middlebury’s Swift House is a Salon for Arts and Culture

At the Blue Bar in Middlebury's Swift House Inn, guests might sip a Ginger Gimlet and soak up the storied atmosphere — not just the historic details of the 1814 building but also the conversations among its current patrons, who might include writers, actors, filmmakers or opera singers.

The sleek bar room — with its oceanic blue-gray walls, from wainscotting to crown molding — epitomizes the upgrades co-owners and former arts and entertainment professionals Serena Kim and Matthew Robinson have made since they bought the 20-room hotel and its on-site Jessica's restaurant.

After several months of pandemic-related delays, the couple moved from Los Angeles to Vermont on July 4, 2020, and closed on the property that September, during peak foliage season. They brought with them a fresh vision for what Swift House could look like and the role it could play in the community.

Although the core inn and restaurant team stayed on, Robinson said their first month as newly hatched innkeepers was "like suddenly being asked to drink from a fire hose."

Once they had a moment to breathe, the couple gradually started making changes. Renovating the bar "was our kind of opening shot across the bow," Robinson said. "We definitely wanted to create something with a slightly more modern vibe." 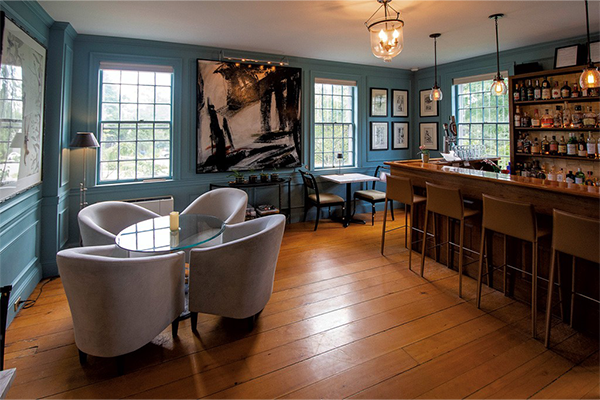 Little by little, Kim and Robinson have been adding their touches, such as redoing lighting, refreshing furnishings, and installing new fixtures and subway tile in guest suite bathrooms. Outdoor landscaping improvements include a set of granite steps that cascade down from the crest of the expansive, rolling lawn.

Upgrades aside, Swift House's three buildings — the main house, the carriage house and the gatehouse — retain their essential Victorian-era character. "I like to say they kind of rhyme with the period," Robinson said.

"Last summer we built a stone patio in front of the house that most people think has been there forever, which means we got it right," he said.

The couple takes seriously their role as stewards of a treasured town landmark. The main building of Swift House was the longtime Vermont home base of John Wolcott Stewart, a Middlebury native who served as a Vermont legislator, governor, U.S. representative and, briefly, U.S. senator, mostly during the latter half of the 19th century.

The house became the primary residence of his daughter, Jessica Stewart Swift, in 1939. Over the next several decades, until she died at age 110 in 1982, Swift supported many local institutions with significant financial contributions. Kim said neighbors have shared stories about how she would serve hot cocoa to children whom she invited to sled down the sloping front lawn.

Kim and Robinson have worked hard to build their own community connections, particularly in the arts, the field in which they both worked for decades before moving to Vermont. For the past two summers, they have erected a large tent behind the main house and collaborated with local arts organizations to host concerts, movie screenings, plays and fundraisers.

"Matthew and Serena quickly established Swift House Inn as a friend to the arts ... [and themselves] as community-minded leaders in Addison County," Lisa Mitchell, executive director of Middlebury's Town Hall Theater, said.

"It's as if they've been running an inn and restaurant for decades," Mitchell continued. "They roll up their sleeves and pitch in on all aspects of the job."

The inaugural tent event was the couple's wedding on July 3, 2021, one day shy of their first full year in Vermont. The following week, they launched a summerlong series of Martin Scorsese films in partnership with the Middlebury New Filmmakers Festival.

"The juxtaposition between our wedding and Raging Bull or Cape Fear was a slightly different vibe," Robinson acknowledged with a chuckle.

For Robinson, 59, the move to Vermont was an East Coast homecoming. He grew up just south of Buffalo, N.Y., where his father was a bookbinder at the Roycroft arts and crafts community. A portrait of Robinson's father hangs in Jessica's library dining room.

Robinson spent more than 25 years working for major studios selling international television rights for iconic series, such as "Friends" and "The Simpsons." "I lived out of hotels, which is very valuable experience for this gig," he said dryly.

Kim, 49, is a native of Los Angeles who describes herself as "an OG party kid from Koreatown." Her late stepfather, Young-Il Ahn, was a leading Korean American abstract expressionist. One of his paintings graces Jessica's main dining room.

After earning a degree in Islamic history from the University of California Santa Cruz in three years, Kim became a successful DJ, hip-hop journalist and editor at Vibe magazine, covering stars such as Kanye West, Jay-Z, and Beyoncé.

When Kim and Robinson met via a dating app in 2018, both were in professional transition. She was a little leery when he told her that he was an out-of-work studio executive, "but we totally hit it off," Kim said. 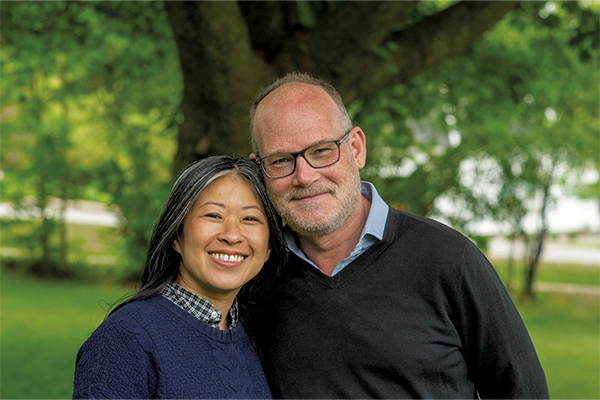 She admitted that she was also wary when a friend of Robinson's observed that he was such a gracious and adept host that he should consider buying a small hotel. Robinson, however, was intrigued and signed up for an aspiring innkeeper program offered at a hospitality trade show.

"I didn't go running out of there with my hair on fire, thinking, What a terrible idea," he said.

At the trade show, Robinson met an inn broker from Vermont and started looking at properties. Swift House landed at the top of the list because of its Middlebury location. "It's just such a rich arts and culture sort of center for this part of Vermont," Robinson said.

"We are arts and culture people," his wife added.

He later learned that Kim had always dreamed of living in a New England college town, partly influenced by her favorite book, Saul Bellow's Herzog. "I always thought that was super romantic," she said.

For Kim, the Middlebury Bread Loaf Writers' Conferences and associated literary community were also big draws. She has become an enthusiastic member of the Addison County Writers Group and hosts its meetings at the inn. Other arts organizations, such as the Opera Company of Middlebury and Middlebury New Filmmakers Festival, hold board meetings there, too.

But Swift House's bread and butter is hosting overnight guests, many of whom come to town for college-related events or because they are families of current or prospective students. The inn also welcomes many tourists meandering through the Vermont countryside by car, bike, canoe and even foot.

All guests will find comfortable, well-outfitted bedrooms, many with cozy fireplaces and classic four-poster beds. Eight of the 20 rooms are dog-friendly, reflecting the couple's devotion to their dogs, Kubrick and Elsa. (Naturally, they are named for Hollywood notables: director Stanley Kubrick and the heroine of Disney's Frozen.) Half of each pet room charge goes to the local animal shelter, Homeward Bound.

Jessica's serves dinner Wednesday through Sunday, June through December, and Thursday through Sunday the rest of the year. Many locals, including the innkeepers, especially enjoy the atmosphere in the Blue Bar, where mixologist Laura Fenn crafts creative cocktails in front of the glowing backlit bar.

Laura's husband, executive chef Rob Fenn, has helmed Jessica's dinner crew for 12 years. The native Vermonter returned to his home state after cooking at mountain and lake lodges in Wyoming and Iowa.

The seasonal menu might feature a salad of baby kale and roasted delicata squash, accented with smoked bacon, spiced walnuts and dried cranberries ($14). Honey-glazed pork belly could be topped with innkeeper Kim's housemade kimchi ($16), while roasted cauliflower steak might be served over turmeric-infused risotto with tomato ragout and olive tapenade ($22). A menu staple is New York-raised duck cooked two ways: seared breast and roasted leg with a port wine gastrique, accompanied by a crisp-shelled potato croquette ($46).

Jessica's is one of three Vermont restaurants to have earned a 2022 Wine Spectator Best of Award of Excellence, but its list is approachable and many bottles are affordable. Intriguing offerings include wines made with mencía, explained on the wine list as "a nearly forgotten regional grape of northwest Spain," starting at $39. Sommelier and restaurant manager David

Herren highlighted another $39 bottle: a Slovenian pinot grigio from a small sustainable winery, which he promised would deliver far more body and complexity than "your grandmother's pinot gris."

It seems a fitting choice to sip at the renewed Swift House, which is well on its way to delivering far more sophistication than the average country inn.

This series, a partnership between Vermont Department of Tourism and Marketing and Seven Days, will run seasonally, presenting curated excursions in every corner of Vermont. The idea is to highlight the state's restaurants, retailers, attractions and outdoor adventures so Vermonters and visitors alike can plan safe, local trips and discover new corners of the state. Happy traveling, and stay safe.